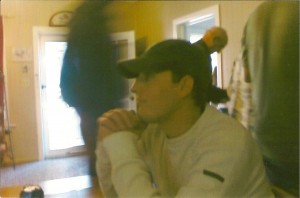 I saw them again. They were watching me. They ran between two columns in activity room.   They’re everywhere.  What are they watching…  Hell at this point I’d just tell them to get them to go away.

Since the dawn of mankind they’ve stalked us. Always in the corner of our eye, always there but not there. But why? Who are what are they.  Well the beginning to our answer started around 1926 by a discovery by Dr. Erwin Rudolf Josef Alexander Schrödinger.  Schrödinger, when not arranging fiendish death traps for cats, had stumbled upon a theory of probability waveforms, that is; probability rules our reality, with that what we accept as reality being certain, and other things that are not being certain. Things that exist in a quantum state can have less than certain, by spreading probability across multiple possible possibilities.  Viewing a quantum object or particle forces it to our local possibility and simultaneously increases its probability to certain in our reality, but impossible in all others.  With things whose nature is quantum, and observation forcing it to a possible reality, but also inherently increases its entropy as well… simply put being in our reality means experiencing time, and time is the fire in which we burn.

At this point, I’m sure that you are thinking “Well, that was a fun and/or tedious slipshod lesson in quantum physics, but what does that have to do with these monsters”.

Well, I’ll tell you.  What if the cabbie was late picking up your father for his first date with your mother? What if your mother wasn’t entirely over that flu and grossed your father out? What if your father got too drunk and your mother decided not to date him again? What if one of them even died.  Well these small changes in your history are enough to make your probability uncertain.  You never were.  You are stuck at 98% and you are not.  Simple as that. You could have existed, but due to the harsh whims of the butterfly effect you never were.

That’s what these things are. They were almost, but as they were not they are consumed with hatred for all those that are, even more so for those they hold responsible (justified or not).  Due to the energy of this intense hatred, they are able to push through into our reality and be seen, if only for a moment.  Upon registering them in your vision, you notice them and they lose their quantum state; but as they do NOT exist here, they’re forced to impossible here and certain no where and by the time you look they are gone, what’s more they were never there.  This is traumatic for the shadow people, as their jealousy and hatred powers their intrusions… it’s akin to finally having the strength to stand up to a bully and then having the bully thoroughly traunce and humiliate you for your troubles.   It will take them up to an hour to re-materialize in our reality but they can not affect our reality other than brief flashes of being seen, they can not physically harm the players, nor can they even push a pebble.  They are not part of our reality and can’t really affect it nor can they be affected by it because just as you can’t be killed right now by the knife that isn’t there.  They can’t be targeted because to target them is to observe them and you can’t target what doesn’t exist.

So what’s the point?

Stress is the point.  Every time a shadow person is seen, there is a san loss of 1/1d3, regardless of if you’ve seen one before or not.  They keep you on edge.  They keep a weary adventurer from recovering any sanity while checking themselves in at a sanitorium between adventures.  As time passes they will slowly eat at an adventurers mind until there’s nothing left… until they’re seeing shadow people everywhere.. even when there is no shadow people.

Well then how do I kill one?

Simply put you really can’t.  They’re not alive in the first place.   They are the slaves of probability.  They do fade away over time; as the probability of them existing forks with chance and drifts further and further away from what we consider real. A shadow person is incapable of “existing” (I use this term very loosely for obvious reasons) past their own possible natural lifetimes.  For those who are impatient; Bind Soul can be used to trap the shadow entity, which would cause it to be forcibly observed in our reality and would burn it up to oblivion with entropy.  This is very dangerous as it’s akin to cleaving a large chunk of the edges of our reality out of existence.  Expect various changes in reality itself afterwards; like everyone else is obvlious to the idea that now we have FIVE fingers on each hand instead of the four you grew up with.  The actual effects of this are up to the GM’s discretion.

Woe is unto them however, for they were the ones who almost where, who almost were born, almost fell in love, almost grew old and died.  They were all that could have been, and for no fault of their own, they will never be.

Armor: None, any form of armor would bestow entropy

Spell: None, other than harnessing their hatred to press into our reality… even if briefly.

Sanity Loss: 1/1d3 to see a Shadow Person, regardless if you’ve seen it before or not.

Posted in Creatures, Creatures and tagged OctoberNomicon2014. Bookmark the permalink. RSS feed for this post. Leave a trackback.