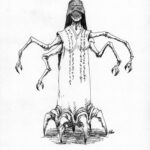 It was something of a female figure, taller than any human, moving among the seeming infinite shelves of books. A finger traced the spines of the collected volumes, at the end of a misformed arm, segmented like that of an insect. A priest’s vestments hung from the being’s body. Across the gown were sigils I could not comprehend. Yet something inside of me roiled when I saw them. The creature floated as it moved. Sharp, thin feet, dozens of them, kicked from under the hem of the gown. I must have made some sort of noise. It turned toward me, a hiss coming from its skeletal face. It lifted a veil covering its eyes. The empty sockets began to glow.

Alternative names: Canonesses of the True Face, Sisters of the Throne.

END_OF_DOCUMENT_TOKEN_TO_BE_REPLACED

We at Shoggoth.net are proud to announce we just launched our own Mastodon Server for all you weirdo cosmic horror & cthulhu mythos fans to join. Sign up now!

Checking in! I hope you’re all doing well, fellow writers. My story just crested the 26k spot, which means that I am a little behind, but I am looking forward to catching up this weekend.

Also, don’t be afraid to sign up for the Advent calendar thing we’re doing for December. If you’re looking to pad your word count, that’s an easy way to do it!

A Picture of a Rose 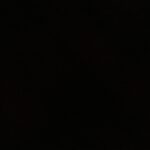 END_OF_DOCUMENT_TOKEN_TO_BE_REPLACED

We’re still looking for submissions for December. We’ve got two award winning writers already on deck. Submit today to get your fiction displayed along side theirs!! 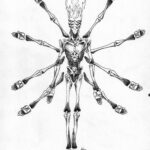 It hurt the eyes just to look at the being. The air around it shimmered, like pavement on a hot summer day. There was no radiation, the scientists in charge assured us. The effect was due to thex being’s strange composition, they said. It was just a guess, though. They’d never been able to get a tissue sample. The colossal creature seemed to be made entirely of bone or something like it. Whatever it was, it’d proved too hard for the government’s tools to even chip. Immense chains binding it gave the illusion of security. No doubt if it awoke it would easily shrug them away. Even as it slept, it felt as though the being was reaching inside of our minds, weighing our sins, judging our worthiness.

Alternative names: Angels, Cleansers of the Earth, Fires of the Elder Gods.

END_OF_DOCUMENT_TOKEN_TO_BE_REPLACED

Hey NaNoNerds!
Checking in! How is everyone doing?
I’ve got 7636 words toward my 50,000 word goal for the month. That puts me a little bit ahead of the day count, but I know something will come up that’ll eat up that lead.
How are you doing and what’s your word count?
Any hurdles you have had to overcome in life or plot or otherwise? Has anyone received one of those 30 covers in 30 days? Show it off!
Let us know!
–Matt