Harvest from Beyond: The Seeds and Growth 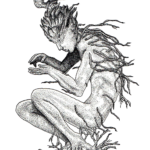 Elijah, Nathan, and myself, along with a few others, including some of the town’s older boys, went out to the Willow place. Old Jeff had hung himself on the porch, twisting in the wind before his yard. The yard had been plowed up like a field. There were some string-like plants growing there. Pure white with purplish bulges. Kind of rope like. Whole thing was damnable. We hadn’t set one foot on the property and yet we could barely walk given the shudders. You’d think a blizzard was coming in the way we shook, trembling there on the fence line. Elijah finally went forward. I followed. The first stalk we came across was about four feet tall. By far the tallest of the lot. Elijah nudged it with his boot and the thing moved. No wind. It just folded over. Trying to get away. It was then we saw the veins. Thin red ridges pumping away. One of the purplish bulges blinked. Elijah screamed. I’m told I fainted. By the time I came to that “field” had been all torn up. Emma and the children were above ground again. Her had had been split with a plow. Same with the brother and his sisters. Not from us. That must have been old Jeff’s doing. Their bodies had roots and shoots like potatoes. They writhed. They… bled. The Willows and their place were burned that very night.

END_OF_DOCUMENT_TOKEN_TO_BE_REPLACED 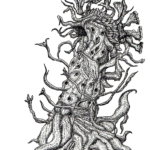 C. Davis: “I already said, these fuckers aren’t growing plants!”
R. Miles: “Just breath, Cynthia. Be honest with me. Are you off your meds?”
C. Davis: “Fuck you.”
R. Miles: “Please be calm, Cyn—”
C. Davis: “Are you even listening to me?! I’m telling you. They have some… thing in this lab. Something big. Bigger than a house.”
R. Miles: “I am going to call someone, Cynthia. You need help.”
C. Davis: “Don’t you hang up on me! Don’t you understand? It whispers things, Ron. It told me how to make the seeds. Oh, God! All those missing people…”
R. Miles: “I’m calling the cops, Cynth. You’re not well.”

END_OF_DOCUMENT_TOKEN_TO_BE_REPLACED

Jessica did not look so well so I sent her home early. Our cataloging of the library donations was almost finished and I did not mind staying late. This set of books came from the home of a recently deceased local recluse named August Taylor. Seems his nephew had no interest in keeping his library when sorting out the estate.

It was midnight by the time I had everything recorded and sorted, but when I left, Jessica’s car was still in the parking lot, underneath the light post closest to the front doors. She sat slumped against the driver’s side door. Her skin had gone a sickly gray, and her pale green eyes were glazed over in a yellow film. A sharp wheeze rattled from her throat as she struggled to breath. By the time the ambulance arrived, she was gone. That…thing had already emerged.

Her head cracked open like a brittle egg dropped on the pavement. Something moved amongst the black sludge that drained from the opening. It was a sleek, inky looking thing about the size of a tennis ball. A myriad of tiny eyes glistened in the soft glow of the parking lot light before it rolled or sloshed off into the night.

I had collapsed into hysterics before the paramedics got to the scene, and when they saw Jessica, one of them remarked, “looks like another one. Just like August Taylor.”