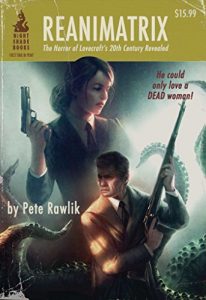 Reanimatrix is the third in a series of books written by Peter Rawlik that focuses on a world that Peter has built out of H.P. Lovecraft’s works focused around the story Herbert West: Reanimator. In the previous stories in Rawlik’s world, he’s introduced his own reanimators and several other characters, but weaves them into the Lovecraft mythos flawlessly so that you can see exactly where these characters are even when you’re just reading Lovecraft’s stories. He fills the gaps, so to say, and he’s very good at it.

Reanimatrix follows a protagonist who has seen some weird stuff, a la Lovecraft, and after being indoctrinated into the world view that this weird stuff is kind of everywhere, he becomes a local specialist in Arkham. He’s the guy on the police force that the police send to the weird crimes.
After meeting a woman, Megan Halsey-Griffith, briefly before his police career, the protagonist, Robert Peasley, falls in love with her from afar. Alas, this romance isn’t to be, as the next time that Robert sees Megan, she’s dead and entangled in a fisherman’s net.
When her body disappears, and the case seemingly gets closed, Robert becomes obsessed. He buys her house, reads her diaries, goes off the deep end essentially.
Then things get really weird. Her diaries map out her interesting history, her lineage tied back to the actions of Herbert West and events that took place in the first book by Rawlik as well as in Lovecraft’s tale.
The Bad:
It has a very slow pacing. The most interesting scene in the beginning focuses around a botched version of the Reanimator Formula in France that has people reliving their last moments. This scene did well to introduce the concept but also made me wonder if following that serum and it’s use (maybe in criminal investigations) might have been a stronger narrative. That is the only really exciting bit at the beginning, and after that it becomes incredibly over-descriptive in every possible scene, slowing the pace even further. I’ll be honest in that I picked up this book about a year ago, stopped reading it only a quarter of the way through, and only recently decided to finish it last week.
The pacing does pick up, although the description of every little thing never stops, and this book really picks up pace when Robert finds Megan’s body. Then it gets weird… There’s lineage stuff in this book, and sex is a big part of how lineage comes about, obviously, but instead of explaining that people have sex, the story disembarks “Weird Murder Mystery” and suddenly jumps the track to “Esoteric Eroticism” but for only two scenes in the whole book. These scenes weren’t necessary for the plot and only came across as the author looking to exercise his skill set. Somewhere along the lines, it feels like he wanted to know if he could write weird sex scenes (weird like Lovecraft with fish people and zombies, not weird like “eww sex.” Sex scenes have their place, even weird ones), and so he did and then he put them into a story that’s weird pacing hadn’t revolved around weird sex scenes. It would have made sense if he continued to pepper them through the story, but he has only two and then an exposition on how one of the main characters will be trained in the arts of sex but then never touches on it again. I guess my concern is: What was the point?
The Good:
The things that I liked about this book were plenty, and weighed heavily in it’s favor. Rawlik does what I’ve done with some of my stories (looking at you Dr. Doran) and weaves a tale that tries to incorporate multiple stories from the Mythos. We have the Reanimator, obviously, but also the Dunwich Horror, The Witch House, Thing on the Doorstep, Shadow Over Innsmouth, Whisperers in Darkness, The Case of Charles Dexter Ward, and more. Every chapter touches on a different aspect of the mythos and flawlessly weaves it into the narrative.
Also, I joked earlier about Robert’s obsession with Megan, but that wasn’t really a problem. His obsession is obvious, as he’s seen weird things and he’s gotten a crush. His obsession with the weird sets him out on a mission to either save, protect, or solve the mystery that is Megan Halsey-Griffith. Taking us down the Rabbit-hole this way makes Robert seem not weird, but enlightened.
I really liked the portrayal of Herbert West throughout this story as well. He’s creepy, but not just Lovecraft-creepy, as I feel this version definitely embodies Jeffrey Combs.
I mentioned the clever weaving of Lovecraftian mythos into this story, but Rawlik also involves several other stories from that time. I had to google the obvious mentions, but there’s one that references Ms. Halsey-Griffith visiting a cousin who just so happens to be from a movie out of the 30’s regarding reanimation, and yet another that I can’t recall at the writing of this review. Rawlik has a gift for stitching together narratives in a way that makes it seem natural.
I did like this book, a lot. The slow pacing, weird sex scenes, and descriptive nature of the story don’t detract from the strength of the addictive plot that pulls you in and makes you want to solve Peasley’s case with him.
I give this story 4 out of 5, but hope that future installments go back to the Weird Company side of Rawlik’s writing.