For your sick and twisted enjoyment today, Shoggoth.net brings you this all-too-plausible story of a man who sees the truth around him … and wants to do something about it.

Of course it all began before the coming of the Twenty-First Century, yet I will always associate it with the new Millennium. The printed circuit, for instance, is technology from the last century. So is fiber optics. And satellite communications. The components that go in to the manufacture of the millions and millions of touchscreens, the little interconnected computers that people carry with them everywhere, all of these owe their genesis to technology predating 9/11. And before that? Well, that’s where my madness began … 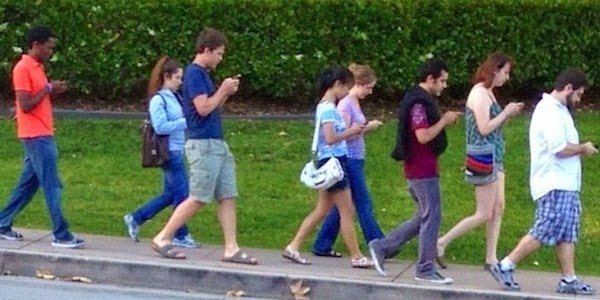 You see, I do not accept—in fact, I cannot believe—that the LED screens to which the general population are so attached arose, ultimately, from terrestrial technology. Yes, I have bought in to the conspiracy theory that our present-day computers owe their existence to reverse-engineered technology retrieved from crashed UFOs. That’s right, I’m talking about Roswell, and any other crashed flying saucer story you can find on that alien invention, the Internet. You can read about this in books like The Day After Roswell by Philip Corso and in books by other ufologists on the same subject; it’s not like somebody just made up this conspiracy! The screens that people are constantly watching are not the only technology the government and private industry engineered from E.T. tech.

But it is not those other technologies that have me so frightened (dare I say madly terrified) as those portable LED screens. For I have seen human behavior so altered by these damned invaders that I now fear for the survival of a sizable proportion of the human population. I have no doubt that minds alien and calculating planned this fate for us eons ago, perhaps as dreams of things to come foreseen by the Old Ones who control the other aliens and their spacecraft that are commonly referred to as UFOs.

What behavior have I witnessed that has me so terrified? I have examples, and they are so shocking to me that they drive my rational mind into fits of wild screaming, for indeed I have lost my sane faculties. I once saw a teenager riding his skateboard down the hill of a very busy thoroughfare and staring at the screen in his hand. On numerous occasions I have witnessed people crossing heavily trafficked streets while staring only at their screens. I have often seen mothers and fathers with their young children standing at a street corner while automobiles sped past, paying full attention to their screen and none to the children, who know no better than to enter a crosswalk when it commands “Don’t Walk.” And of course I have seen the drivers of automobiles texting on their screens, despite the concerted effort of transportation agencies, cellular phone companies, public schools, and filmmakers to prevent this behavior with public service announcements and fear films like “From One Second to the Next.” It appears that these well-intentioned efforts have been for naught and that a new factor of natural selection has appeared among our populations. The Screen People, I call them. They are a subpopulation that has appeared in this new millennium who are so fixated on their screens that their own safety is willfully traded for pixel-watching.

The evidence, to me, is overwhelming. I can only believe that people have been lulled into a suicidal behavior pattern by the plans and machinations of alien forces of darkness. I will go a step further—a step which will certainly convince the Constant Reader that I have most certainly lost my proverbial marbles (Query: Do children even know what marbles are anymore, aside from their two-dimensional representations on a screen?). This further step is what has driven me most certainly into madness.

This step is that the Screen People are not people. There have been those who joke that Screen People are zombies, the shambling undead that are currently so popular in our entertainment culture. But I take that metaphor much more seriously than those who have placed its proclamation as a bumper sticker onto their automobiles. No, I do not believe that the Screen People are literal zombies. I believe they are something far worse. They are the empty shells of what used to be human beings with minds that are now filled with the will of the Old Ones and the unnamable eldritch gods of spiraling space and fathomless time. For when I look into the eyes of the Screen People I find no soul looking back, no personal consciousness, no center of awareness, no singular intelligence—only the blank stare of the biological robot, programed to behave as mindless servant to the horrid Nyarlathotep. These servants will gather about them more servants, millions more, for the devouring god.

The Screen People are the other. I admit my xenophobia freely, for what does that word mean but “fear of the other”? I could no more empathize with a Screen Person than I could with a pocket calculator—probably less, in fact, since the pocket calculator most often provides a useful, helpful service. And the thought of loving one of these corrupted humans? Impossible! Even if somehow I could overcome my fear and disgust of a particular Screen Person, I would always know that I was second in its cold heart; a text alert would take precedence over my proclamations of compassion.

I hate the Screen People and will soon lose my freedom, if not my life, due to what I will do next. For I have attained a weapon, a gun designed by humans, not aliens. It is a powerful semi-automatic. I will walk into a mall or a crowded outdoors agora and I will aim and fire at every Screen Person I see. They will be oblivious. I am certain they will die without for a moment looking away from their screens. And so their shells will fall and the plans of the Old Ones, the aliens, and the horrible Nyarlathotep will be thwarted by the most minuscule of margins.

Am I insane? I can accept that. But I can never accept them. I will save us all.