The leading edge of the ripple is aquamarine, with trailing edges of amethyst. The two small suns, nameless, are prominent, one pale yellow, one dim crimson, high in an azure sky. The twin moons, nameless also, trace a path from the lake shore to the far horizon, passing before the starscraping towers of ruined Carcosa, over the courts of the King in Yellow.

It is the first season of the year on Carcosa. The blooms have yet to show. The lake, Hali, is verdant, mordant, fertile with possibility.

The versions of the play that are performed this season may hold out some forlorn hope, a touch of pathos, of genuine tragedy amid the madness and death. Perhaps a player or two will even survive until the next performance.

Stranger things have happened, in Yhtill. 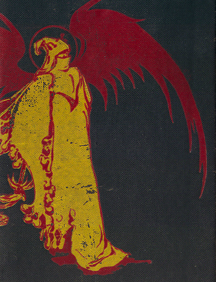 I can’t see much from my current perspective. Ironic in that my entire surface is an ocular device, doubly so in that I am sessile. Or virtually so. Move I do, but so slowly, so glacially slowly, that my movements escape perception. I inch forward toward the lake, where I may be reborn.

Igneolife does that here. The other forms have their own techniques, and spores and wafting seeds and flying creatures abound, all armed with some kind of savage ability. They proceed overhead in a pavane of their own. Meanwhile the King and Cassilda dance, and Demhe in the center of the lake reflects nightmares into the sky.

The nightmares are the dreams of the alabaster monstrosity that squats in the lake. When it is present it dreams constantly, and those images inform the play as well, as they affect the players.

Elsewhere, the images and proceedings of the play are simply reflections of the play as it is presented in its original surroundings. Metaplays, spreading the word of he who is not to be named across uncounted galaxies, in uncountable languages, in impossible landscapes.

Now and again the monstrosity journeys, and projects its thoughts less powerfully. Then the King is ascendant, and the play mutates to fit. Cassilda dances still, but the King conducts the shadow orchestra, pulls the strings of the shadow players, those whose shades he holds in keeping. The songs the zombies sing are more plaintive, subtler, the play more nuanced on those occasions.

I have seen that, yes, that and more, from my previous perspective.

I have been here for long and long. First I was incarnate at Court, but fell out of favor and was removed to the stone garden, where I am silent and subject to the vagaries of the seasons.

There are four seasons on Carcosa, each asserting the dominance of one subset of the quintuple suns.

As I am rock and therefore not vulnerable, I survive and observe. I do not necessarily remain of sound mind, but that does not negate my observations. Rather, it may lend them verisimilitude, some semblance of truth remaining regardless of the prevailing narrative.

Carcosa, the planet, is quiet now. The flora, the fauna, the myco, the igneo, they live unaffected. For now.

There is time to reflect.

Before I was at Court, I walked the Earth, a common tradesman dealing in cloths. During dreamtime, I managed to climb most of the way up a certain mountain, in order to view the face thereon, concealed from the ground by perpetual clouds of dust. I got close enough to determine that which kicked up the dust and then I was whisked into the sky. I swiftly became insensible, awakening when I was unceremoniously dumped onto the emerald-tiled floor like last week’s laundering, looking up at the King in his pallid mask and tattered finery.

The performers, of course, are awakened for the occasion, a revolving studio system of has-beens, never-wases, never-will-bes, and the occasional A-lister that fell from grace. These mostly appear during Aldebaran’s cycle of dominance, when murder is the method of madness.

Now it is turquoise and violet in an indigo sky, with the black stars dotting the blue and the twin moons on the horizon. Alienation is the craze. Night has fallen.

Hali bubbles briefly as he who is not to be named performs an unseen action, and waves of aquamarine and amethyst ripple across the lake. The energies ripple up the shore and infiltrate the play. He does not care to suffer others’ existence–therefore, he wishes it, dreams of it, aches for it. The play amplifies this impulse and broadcasts it to receptive minds across the universe.

Carcosa, the planet, dreams in waking. It dreams of the far far future when all the races are at twilight, when entropy has at last triumphed and the suns themselves are dimming. This dream also is reflected in the play.

In time unspent, in lands unknown
in millenia ahead, in times of dread
the future, it’s said
will not be kind
as the kingdom goes to the dead

In Yhtill, the captive audience dreams of long knives and rapine and torture. Igneo, it is, that audience, rock-life, for who in their right mind would willingly attend the play, knowing in advance some of its affect? The rest of the world gets its fix secondmind as we project our impressions. And the kintergarten chain ripples its way across the universe, to reach the sensitive, the artistic, the receptive, and to change them, tweak them, subject them to sinister urges and unexpected fits of mindless violence.

Directly behind the ranks upon ranks of igneo-life is the Forest of Knives, where spiky plants drink the blood of the small animals that eat of their root, when the animals are careless enough to be cut by the poisonous leaves. Under the cover of the spikes live the myco, who cover the planet, under the ground, and link the world together. Carcosa is alive and aware.

Behind the Forest of Knives is the Outland. It is populated by small fierce animals, hostile mobile plants, igneolife, night-gaunts and byakhee, and ghouls. The Outland is at some points connected to or is part of the Dreamlands, and there are caravans that traverse shadowy routes to and fro.

When I was at Court, I was at times a player, at times audience. Attendance is mandatory, and strictly enforced. At other times I ventured forth, even into the worlds of men. For man I was, once, and will be again before all is written in the book of my life.

Quite a lengthy tome that will be. The things that I have seen and been beggar the imagination.

In time long gone by, prior to the advent of man upon the Earth, before the reptilian races that preceded man, when another mammalian group was pre-eminent, I was birthed. I was two feet tall and three long, and scuttled about on four handlike paws with evilly curved talons. My face was prosimian and my manner indulgent when it came to sudden attacks of violence. I worshipped a long-forgotten god and had an unremembered family.

I went too far in my worship, enacting forbidden rituals and mouthing words that are still taboo, and the gods whisked me from that existence and cast me adrift into the streams of the multiverse. There are fiends there, foul hounds who rend and tear the soul from you, and are always lean and perpetually athirst. There are abominations who will pass through you and take your astral body with them, making of you a shell for the next maleficient to occupy. They can be evaded but never escaped, if you remain within their realm of the without.
I learned, in time, to move in certain patterns, to describe certain arcs and angles during my passage, and so to move between spaces myself.

The monstrosity who is not to be named does that, though he didn’t have to learn. For him it is innate, part of his nature, to travel between the spaces, and on into any darkness. The colder, the better. He likes the spaces between the stars the best.

I am not certain why he does not just remain there. He has never said.

Even now, I remember how to describe those planes, those arcs. But I cannot perform those actions. Not swiftly enough to matter.

The focus trees are moving down to the shore now. They will dip their roots in the lake and leave their seed on the surface. Those seeds fortunate enough not to be gobbled up by the flickerfish will germinate next season. The spiny larvae will wriggle back to the shore and provide fodder for the razormoles, who will be emerging from their burrows to feel the first rays of the red sun Aldebaran as it begins its ascendancy.

The razormoles will eat everything in their path on the way to the shore, where they will bury their young in shallow graves. The young gestate almost immediately and eat their way back to the burrows, dining on their forebears and whatever forms have moved toward the shore in the interim.

Only the igneous escape their appetite. We are not spared the screams and dying agonies of the victims. And we are powerless to help.

Duane Pesice
Duane lives in the desert southwest with his pets, guitars, and monsters. Periodically he sends them forth.
www.planetmoderan.com