All posts by Scott Roche

Sands through the Hourglass: Part 6 of The Curse of Azathoth’s Amulet

Things keep getting worse for our intrepid adventurer. MUCH worse.

The voice kept guiding Taylor. Whatever kind of car they were driving it was clear that it had more oomph than the SUV he drove. It didn’t help that he had no desire to get caught by the police, thus giving him far greater caution than they needed to exhibit. Still, he didn’t seem to be losing them.

“They only need to delay us. Can they summon the things or open the portal while they’re on the move?” He asked the question out loud, though he didn’t think he needed to.

“No. They will need to stop and make some sacrifices to do what they need done. It doesn’t need to be a big one, but the larger the amount of life force, the bigger the gateway.” The Mad Arab’s voice was real enough for Taylor to wonder if anyone else would be able to hear it.

END_OF_DOCUMENT_TOKEN_TO_BE_REPLACED

Part V of The Curse of Azathoth’s Amulet: LOST. 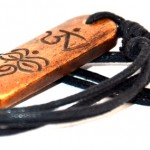 Dr. Taylor drove as long and as fast as he reasonably could. His eyes felt like they were made of sandpaper. His yawns threatened to crack his jaw and no amount of head shaking and skin pinching could keep him alert. The second time he drifted off, he recognized it was time to pull over. If he didn’t, he’d die in the resulting crash and all really would be lost.

He passed an exit that announced the presence of several hotel chains. The street he eventually found himself on was littered with the refuse of humanity. He pulled into a two story-hotel whose neon “Vacancy” sign had a burned out “Y”. The potholes were more like craters and there were only five cars he could see.

END_OF_DOCUMENT_TOKEN_TO_BE_REPLACED

Doctor, Doctor: Part Three of The Curse of Azathoth’s Amulet 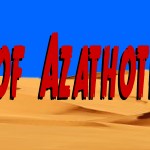 Murder! Intrigue! Spookiness from the sands! It’s the chilling third installment of the eldritch serial The Curse of Azathoth’s Amulet!

Dr. Taylor hated loose ends. He didn’t like them when it came to any aspect of his life. Most especially when it came to his research. Now that he would spend the rest of his life on the run, or at least as much time as he had before he’d be able to prove there were monstrous forces on the loose, he hated them even more. He drove the precise speed limit, in case there were any cops on the prowl. He didn’t want to give them an excuse to pull him over.

His first stop would be his office. He needed to get his notes and get rid of anything regarding his trip tonight. He couldn’t leave anything behind that would be a trail for someone to follow too quickly. There was no telling whether or not the creature who was posing as a human college student would have his precise description and his license plate number. Assuming they didn’t could be deadly. No, better to assume there were things worse than wolves at his door.

END_OF_DOCUMENT_TOKEN_TO_BE_REPLACED

Scott Roche continues his Golden Age serial, The Curse of Azathoth’s Amulet, with Part Two! Told in the arch style of the Republic Serials of the ’30s and ’40s, there’s no telling where this is going until you get there … and it is HORRIBLE indeed.

Read Part One, “Down in Mexico.”

It all went downhill for Doctor Taylor as soon as he visited the Ancestral Pueblo site just a few dozen miles from his home in Albuquerque. A colleague knew he’d been researching symbols used by the Anasazi, as they were known to some, and their relationship to other symbols used by equally ancient people groups the world over. There was no known connection between these groups, and it was thought by some that they spawned from a collective subconscious or from some other psychic network. Taylor, of course, believed all of this was complete hogwash. There had to be a better explanation. The desire for that better explanation was why he found himself in a kiva, a sort of pueblo holy site, that had only recently been discovered. Doctor Samson assured him that the site dated back to at least the eighth century BCE. That certainly wasn’t the oldest bit of evidence that had been found, but this was supposed to be in pristine condition.

END_OF_DOCUMENT_TOKEN_TO_BE_REPLACED 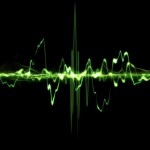 A strange frequency. An elemental horror. A story unlike anything you’ve read.

The new sensation hurt. It was like cosmic radiation, but I experienced it in a new way. I was not used to this and did not like it. The strangest thing wasn’t that, but the new shapes which moved before me. I did not recognize the creature, but I knew it was like the things I’d experienced upon visiting other dimensions. It would be soft and fragile.

“It looks like we have a signal. We’re receiving something.”

END_OF_DOCUMENT_TOKEN_TO_BE_REPLACED

Today we take readers across the border … of sanity. Enjoy.

I had chased it to Mexico. I didn’t want to head that far south. Certain elements looked upon what I did as grave robbing. It didn’t occur to them that the things I took made it harder for the Nameless Ones to make it through an entirely different set of borders. You have to believe They exist to even understand this, so I couldn’t blame the ignorant. I could mostly avoid them, but not when it came to tracking down one particular amulet.