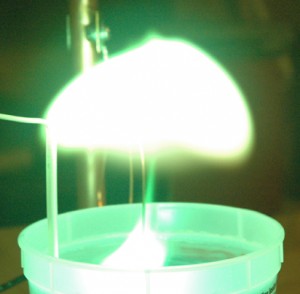 By Sfusare at en.wikipedia. A later version was uploaded by Equazcion also at en.wikipedia. [GFDL (http://www.gnu.org/copyleft/fdl.html) or CC-BY-SA-3.0
(http://creativecommons.org/licenses/by-sa/3.0/)], from Wikimedia Commons.

This particular creepy crawly has its roots in “From Beyond,” The short story by HP Lovecraft. For more information on Crawford Tillinghast, the original Tillinghast device, and it’s catastrophic effects, please refer to that work.

With World War II brewing, Allied forces were scrambling for an edge against the Axis powers, and air supremacy was key. The airplanes first built during this arms race in the sky set the stage for the modern airframes still in use today. Faster planes powered by jets and rockets appeared, along with larger, more powerful airframes. It was a golden age for flight innovation, and while these breakthroughs were mostly the result of hard work of dedicated engineers and scientists, some of the technology was taken from a more sinister source. For the doomed flight of the Kestrel, and the other British planes plagued by her otherworldly legacy, those advances had dire consequences.

During The War, radar and sonar were new technologies commonly used by both sides. They left a lot to be desired, however. Grainy, crude images could make identifying the enemy difficult, and early tales of these shortcomings include a large school of fish being mistaken for a submarine. What isn’t talked about much is one particular experimental attempt to improve enemy aircraft detection by the British Air Force. An engineer by the name of Robert Tillinghast rose to prominence with a resonance generator he claimed would replace both radar and sonar. His invention, which he called the Illumina Device, was supposed to not only assist in the detection of enemy aircraft, but induce a hyper-aware state in the flight crew without the use of coffee, cigarettes, or other costly chemical stimulants. Tillinghast, of course, had borrowed the design from his dearly departed uncle Crawford’s notes in order to produce a resonance device that had a more focused effect on the pineal glands of its targets. While he was aware of the disastrous results of Crawford’s original design from the subsequent police reports, Robert felt confident that his improved device would not suffer the same uncontrolled effects.

He was, of course, very wrong. Tillinghast’s experimental technology was loaded for a test run in a high-altitude Photographic Reconnaissance aircraft and activated once the plane has reached cruising altitude. Most of the details of this flight are classified, but the plane codenamed “Kestrel” all but crash landed back onto base, half the crew dead and the surviving members insane. Stories from the hospital wards began to trickle out of unexplained system failures, and a malicious presence attacking the plane itself from the inside. Hypoxia from an air supply malfunction was officially blamed for the reports, the badly damaged Kestrel was salvaged, and the Illumina Device put to bed, never to be spoken of.

Those salvaged pieces of the plane, however, retained echoes from Tillinghast’s resonator, although the effect had somewhat diminished. Soon, the unfortunate air bases that received the Kestrel’s recovered pieces were experiencing their own mechanically inclined anomalies, or “gremlins” as they became known as. Chalked up as the folklore of a careless mechanic or haphazard designer, these gremlins were a fixture at British air bases until the end of World War II, when many of the afflicted planes were put out of commission.

The gremlins are thoughtless, destructive dimensional creatures that phase in and out around portions of the Kestrel’s salvaged parts. The resonance echoes seem triggered by the presence of electrical fields, leading to the observation by many British airmen that the gremlins would only come out to play when a flight was well under way. Gremlins rarely appear alone, and are frequently seen in clusters of 2-5 ghostly, blob-like entities. While these entities are not intelligent enough to be willfully damaging, they do not react well to the cramped confinement of an airplane interior.

Weapons: Electrical Zap, 40% or 80% against mechanical or electrical devices. Bite 50%

Armor: None, but the gremlins are constantly phasing in and out of this reality. Investigators have a 50% chance to hit the creature as it shifts between the two planes of existence.

Sanity Loss: Seeing one gremlin costs investigators 0/1D2, as they can be mistaken for ball lightning or a hypoxia-induced hallucination. Seeing two or more costs 1/1D6.

Posted in Creatures, Creatures and tagged OctoberNomicon2014. Bookmark the permalink. RSS feed for this post. Leave a trackback.