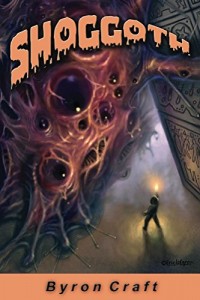 An accepted theory exists that millions of years ago a celestial catastrophic occurrence wiped out every living thing on the planet. This theory may be flawed. Fast-forward to the 21st century. A handful of scientists, allied with the military, discover a massive network of tunnels beneath the Mojave Desert. Below, lies an ancient survivor, waiting…and it’s hungry!

Once again Byron Craft drags us by his tentacles into a masterful mix of Lovecraftian science fiction, mystery, fantasy and horror. (From the book cover)

Bio of Author from his Amazon Page: Byron Craft started out writing screenplays, moved on to authoring articles for several magazines and finally evolved his writing style into exciting, sci-fi, fantasy, horror novels. “SHOGGOTH” is Craft’s second novel of a planned five novel mythos series that reflects the influence of H.P Lovecraft. Byron Craft’s first novel “The CRY of CTHULHU,” initially released under the title “The Alchemist’s Notebook,” was the reincarnation and expansion of one of his most memorable screenplays. Craft demonstrates he is as capable a novelist as scriptwriter. Craft’s novels have all the ingredients of a classic Lovecraft tale, with some imaginative additions.

Overall, the Shoggoth is a fun pulp-action read with the right amount of suspense and Mythos texture to keep the story racing along.  The plot of the story occurs in the Mojave Desert.  Below the desert surface are a network of tunnels where a US Navy research project is being built.  The network of tunnels are ancient and within them waits a Shoggoth.  The story recounts how the scientists, military personnel and other people react to the Shoggoth with some not realizing how dangerous it can be.

The characters are reasonably well-developed and their interactions with one another comes across as realistic.  The motives of the main characters seem to be thought through and portray well.  The author is also adept at his descriptions and his use of words generally.  He does to seem to like saying LED flashlight every time instead of just saying flashlight occasionally.

The author does mix up the history of two different alien races (The Great Race and the Elder Things) somewhat according to “canon”. However, Lovecraft himself said that Mythos were not written in stone but fragments of what cultures and civilizations remembered from events eons past.  Stories that could blur and change depending on one’s concept of science and reality.  So, as long as the author is consistent within their own story, then I do not see that as a major issue.   I would recommend this book for a fun read on a rainy afternoon.

Posted in Reviews and tagged byron, craft, review, shoggoth. Bookmark the permalink. RSS feed for this post. Leave a trackback.