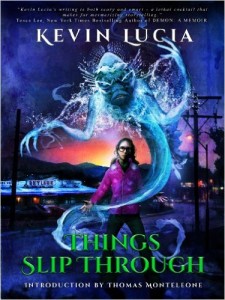 Stephen King’s influence on author Kevin Lucia’s collection of inter-connected stories, “Things Slip Through”, should be clear to any Constant Readers of Uncle Stevie’s books. Lucia’s fictional town of Clifton Heights, hidden in the depths of the Adirondack Mountains, brings to mind some of King’s haunted New England towns. Many of the plot points and characters seem inspired by King’s works. Unfortunately, Lucia doesn’t quite step out of King’s shadow, and too often resorts to horror clichés.

A good example of this is the story “Bassler Road,” in which a man picks up a hitchhiking girl on a haunted, seemingly unending stretch of road at the edge of town. The girl, of course, is not what she seems, and it comes as no surprise when she finally reveals her monstrous form. The man’s sexual attraction to her — even when she shows her true sickening features — and his use of a talisman-like weapon to defend himself, were straight from King’s playbook; thrown in to add some spice to an otherwise stale story.

The framing story that ties everything together involves the Sheriff of Clifton Heights reading a collection of “fiction” written by his friend Gavin, a former English teacher. In one of the early stories we learn that Gavin is not actually writing the stories himself, but was chosen by a mysterious entity to channel real events from Clifton Heights through his writing. This also felt similar to King, who often uses writers as central characters, many of whom channel a supernatural power.

The best story in the collection is “The Water God of Clarke Street”, a scene of which is depicted on the book’s cover art, in which a young girl is antagonized by a strange merman monster she accidentally summons after reading from an ancient black book. The creature swims beneath her feet as she walks across a large patch of ice, begging her to cast the spell that would free it, promising her untold wonders as a reward. This story stands out as the best because of its originality. Lucia digs deep into his own imagination with this one, and produces a truly bizarre monster and an unpredictable story. If more of the stories showed this much dark creativity, this would have been a significantly better collection.

In an effort to make the dialogue sound more authentic to the Adirondacks, Lucia puts an awful lot of hillbilly dialect into the characters’ mouths, including some eye-rolling obscenities for his teenage characters. One story has two boys exchanging at least three versions of the phrase “fart-breath.” “You” is “ya,”  and there are “kinda’s” and “gotta’s” galore. Words that end in “-ing” have the “g” dropped. And so on. Instead of sounding natural, the dialogue draws too much attention to itself.

The stories in “Things Slip Through” alternate between mostly adequate imitations of Stephen King and more run-of-the-mill horror. The stories and scenes that stand out are the ones where Lucia finds his own voice, and taps into that dark creativity that makes for good horror. In the future, Lucia should throw open the cracked door to his imagination, and let more of those good horror ideas “slip through” into his writing.